Grand Rapids Firefighter of the Year, Matt Keusch, at Lids for Kids June 1

Grand Rapids Firefighter of the Year, Matt Keusch, at Lids for Kids June 1

We are excited to announce that Grand Rapids Firefighter of the Year, Lieutenant Matt Keusch, is making an appearance at this year’s Lids for Kids on Saturday, June 1st! Matt is the 49th recipient of this honor, in large part due to his deep commitment to the city of Grand Rapids and the community. 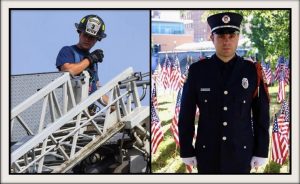 Lieutenant Keusch has served the city of Grand Rapids for twenty years as a firefighter. He is part of the department’s honor guard and is involved in its award ceremonies and celebrations. Over the course of his career, Matt has received six life-saving metals. Because he often meets Grand Rapids residents on the worst day of their life, he strives to make their situation better. In preparation for this year’s Grand Rapids Lids for Kids event, we had the opportunity to speak with Matt regarding the importance of helmets and giving back to the community.

Importance of a Helmet for Kids and Adults

Because firefighters need protection from falling debris and other dangers, the helmet is one of the most crucial pieces that make up their uniform. A helmet that is doing its job properly can reduce the chance of brain and other head injuries by up to 85%! It is just as important for children to wear their helmets. The mission of Lids for Kids is to reduce these injuries while also encouraging kids to engage in an active lifestyle. Matt told us many unfortunate stories of calls he has responded to involving children (as well as adults) crashing their bikes, leading to a traumatic brain or head injury. Bringing the family out to Lids for Kids and having them properly fitted with a bike helmet means you are actively helping to decrease the chance of your child being injured this summer on their bike, roller blades, and scooters. The motto is – wheels under your feet, helmet on your head. 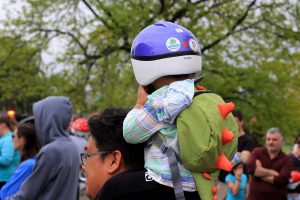 Matt shares a passion for his community and a give-back mentality, much like the sponsors of Lids for Kids. He became a firefighter because he values community and hopes to make it a better, safer place for everyone, especially future generations. We are very excited to have him join us and for Grand Rapids kids and their parents to meet him. In addition to Matt’s appearance, kids will also have a chance to tour a fire engine and meet other local first responders. Similarly to last year, the Cosplay Crusaders will also be making an appearance! GoGo Squeeze will be passing out free samples for the kids to snack on while they are meeting these exciting role models.

In addition to meeting local public figures, children will be entered in a raffle after they receive their free bike helmet. Prizes include local community establishment giveaways as well as over 10 bikes! Kids must be present to win, and may only win once. Thank you to our community sponsors Sinas Dramis Law Firm, Mary Free Bed, Brain Injury Association of Michigan (BIAMI), and Hope Network. The event could no go on without their help.

We are looking forward to a great Grand Rapids Lids for Kids Event. See you at Garfield Park Saturday, June 1st from 10:00 am – 12:00 pm.